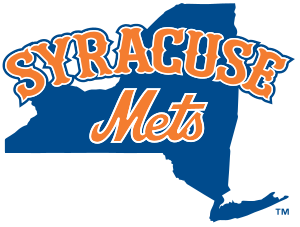 The Syracuse Mets are a Minor League Baseball team of the International League and the Triple-A affiliate of the New York Mets. They are located in Syracuse, New York, and play their home games at NBT Bank Stadium, which opened in 1997 and has a seating capacity of 10,815. The Mets are named for their major league affiliate and owner, the New York Mets.

The Syracuse Chiefs baseball team was established in 1934, when the Jersey City Skeeters moved to Syracuse and were renamed the Chiefs. The team played in the International League (IL) through 1955. They won five Governors' Cup championships during this stretch, including back-to-back championships in 1942 and 1943. The team was then sold and moved to Miami as the Marlins for the 1956 campaign. Another team known as the Syracuse Chiefs competed in the Class A Eastern League (then two levels below the IL) in 1956 and 1957, but moved to Allentown, Pennsylvania, on July 13, 1957. The Chiefs played at MacArthur Stadium from 1934 to 1996, moving to new then-P&C Stadium (1997–2005) in 1997.

Syracuse was without professional baseball from 1957 until 1961, when the Montreal Royals franchise was abandoned by its owners (the Los Angeles Dodgers) and relocated to Syracuse as the top affiliate of the Minnesota Twins, becoming the Syracuse Chiefs. After that, the team had affiliations with the New York Mets and Washington Senators (1962), the Detroit Tigers (1963,) and the New York Yankees (1967–1977). Baseball has been played in Syracuse without interruption since the rebirth of the Chiefs in 1961.

From 1978 to 2008, the Chiefs were the Triple-A affiliate of the Toronto Blue Jays. The three-decade Toronto–Syracuse affiliation is the longest of the 11 major league affiliations the team has had since 1936. While the Chiefs reached three Governors Cup finals during this time, many of the players who helped lead the Blue Jays to consecutive World Series titles in 1992 and 1993 passed through Syracuse. In 1994, outfielder Shawn Green hit .344 for the Chiefs, winning the International League batting title and the International League Rookie of the Year Award. The team was renamed the SkyChiefs in 1997 before reverting to simply "Chiefs" in December 2006.

In 2010, the Chiefs celebrated their 50th season of community-owned baseball (1961–2010), wearing 1961 jerseys for every Thursday home game. The team brought back radio announcers from the past, such as Dan Hoard and Syracuse University alumnus Sean McDonough. They had a 76–67 win–loss record, with pitching prospect Stephen Strasburg winning two games and losing one in five appearances.

In 2011, the Chiefs, wore throwback jerseys for every Thursday home game to commemorate the 35th anniversary of their last International League Governors' Cup championship team (managed by Syracuse Wall of Fame member Bobby Cox). The Chiefs added four alternate jerseys to their rotation for the season: one for Latin American Day, a second for Jackie Robinson Day (commemorating Negro league uniforms), a third for national holidays such as Independence Day and Memorial Day, and a fourth for Breast Cancer Awareness Night. The team played the Pawtucket Red Sox on August 20 at Fenway Park as part of a doubleheader in conjunction with the sixth annual Futures at Fenway event, featuring games involving Boston Red Sox minor league teams. The Chiefs, behind starter Brad Meyers, defeated the PawSox 3–1 before more than 29,000 fans. At Alliance Bank Stadium (now NBT Bank Stadium) the Chiefs added a "Home Plate Club" to the stadium: premium seating in the first four rows behind home plate, with waitstaff for merchandise, food and drinks.

On May 14, Chiefs DH Michael Aubrey went four for four, hitting four home runs in an 11–0 victory over the Durham Bulls and becoming the second player in team history to hit four home runs in a game; Gene Locklear was the first, on July 14, 1977. On August 27, Stephen Strasburg pitched his only rehab game for the Chiefs, against the Rochester Red Wings. Giving up two hits in the sixth inning (his only hits allowed before departing, with the Chiefs leading 1–0), he received no decision in Syracuse's 4–3 win. It did, however, clinch the Chiefs' third Thruway Cup victory; the team's other wins were in 1999 and 2010. The club's record for the season was 66–74, 14 games out of first place and fourth place in the six-team North Division.

On April 5, 2012, the Chiefs opened at home against the Rochester Red Wings. Top draft pick Bryce Harper, later that month promoted to the Nationals, made the opening-day roster. Randy Knorr did not return for a second season as manager, and Tony Beasley was promoted from the Harrisburg Senators. The Chiefs played all 16 of their games against the Scranton/Wilkes Barre Yankees at the now renamed Alliance Bank Stadium (2005–2013) due to stadium renovations at the Yankees' ballpark in Moosic, Pennsylvania. On May 7, the Chiefs unveiled a new high-definition video board in left field, replacing the board which had been in place since the stadium's 1997 opening.

The 2013 season, with manager Tony Beasley in his second season with the team, began on April 4 in Allentown, Pennsylvania, against the Lehigh Valley IronPigs; the Chiefs' home opener was eight days later against the IronPigs. On Throwback Thursdays, the team wore jerseys from 1983 to 1996.

On September 30, 2013, it was announced that 16-year general manager John Simone and any family members associated with the team, including assistant GM Mike Vounitas, were fired. On October 8, former Auburn Doubledays general manager Jason Smorol became the Chiefs' GM, with Jason Horbal as his assistant. It was the first time since 1970 that someone not named Simone was general manager of Syracuse; John Simone had taken over the job from his father, Anthony (Tex) Simone, in 1997.

The Chiefs opened their 2014 season on April 3 with a loss at home to the Scranton/Wilkes-Barre RailRiders and finished the season with the best record (81–62) in the International League, clinching a playoff spot for the first time since 1998 and the first IL North Division title since 1989. NBT Bank Stadium hosted its first ever playoff game on September 5, 2014, a 7–6 loss to the Pawtucket Red Sox which capped off a 3–0 first round series sweep for the Red Sox. The season featured an aggressive promotional campaign, including Social Media Monday, Two-for-One Tickets on Tuesday, Winning Wednesday, Dollar Thursday, Fireworks Friday, Giveaway Saturday, and Family Sunday. The Chiefs sold out the outfield wall, the dugouts, and the field tarp, earning $500,000 in advertising.

Following the 2014 season, the Chiefs would not make the playoffs during the final years of the Nationals' affiliation, including a 54–87 record during the 2017 season, their worst since 1966. Many prospects passed through Syracuse on their way to the MLB, including Trea Turner, Lucas Giolito, and Victor Robles. Randy Knorr replaced Gardner Jr. after 4 seasons as Chiefs' manager for the 2018 season, his second stint with the Chiefs.

The chief operating officer of the New York Mets, Jeff Wilpon, joined Governor Andrew Cuomo and Joanie Mahoney, Onondaga County Executive, at NBT Bank Stadium on October 11, 2017, to announce that the Mets would purchase the Chiefs from the Community Baseball Club of Central New York in early 2018. Under the deal, the Chiefs' affiliation with the Washington Nationals continued through the end of the 2018 season, with the Chiefs becoming the Mets' Triple-A affiliate beginning with the 2019 season. The team was rebranded as the Syracuse Mets, adopting the New York Mets' blue, orange, and white color scheme along with new logos and uniforms on October 16, 2018.

The Syracuse Mets started their 2019 inaugural season with one of the most experienced rosters in the minor leagues. Of the 25 players on the roster, 21 of them had previously played in the majors. They had combined for 7,006 total games. The Opening Day roster consisted of veteran outfielders Carlos Gómez and Rajai Davis, former Syracuse Chief Danny Espinosa, catcher René Rivera, and cult-star outfielder Tim Tebow. The Mets played their first game on April 4, against the Pawtucket Red Sox in front of an Opening Day home crowd of 8,823 fans. Syracuse took a 3–2 lead in the bottom of the sixth inning, but Pawtucket tied the game in the top of the eighth. The PawSox scored three more runs in the top of the tenth, defeating the home team, 6–3. The Mets' first win came in game one of a doubleheader on April 6 in which they defeated Pawtucket, 6–3 in 7 innings. In that same first Mets win, with one out in the bottom of the fourth inning, Dilson Herrera hit the Syracuse Mets first home run.

On May 31, 2019, Travis Taijeron hit the first cycle in Syracuse Mets history in a 13–4 win over the PawSox. It was the first in franchise history since 1987. Rubén Tejada also hit for the cycle on June 19, 2019 against the Charlotte Knights. Despite his efforts, the Mets lost 9–7.

At the 2019 All-star break, the Mets were 42–47, good for 5th place in the IL North Division. After August 7, they made up 6.5 games in the standings to put themselves in a share of the division lead with the Scranton/Wilkes-Barre RailRiders after sweeping a doubleheader versus the Lehigh Valley IronPigs on August 26. They also had a winning season for the first time since 2014. Syracuse went into the final weekend of the 2019 season tied with Scranton/Wilkes-Barre for the division lead. Both teams split both of their respective series' to stay tied for the division lead. The two teams played a one-game tie breaker in order to decide who would win the division, and ultimately make the playoffs. The Mets would lose the one-game tiebreaker by a score of 14–13. Syracuse had led 13–6 going into the bottom of the eighth inning, but Scranton/Wilkes-Barre would come back and score eight runs in the bottom half of the inning to eventually win the game, effectively eliminating the Mets from qualifying for the playoffs.

The 2020 season was cancelled due to the COVID-19 pandemic. In conjunction with Major League Baseball's restructuring of Minor League Baseball in 2021, the Mets were organized into the 20-team Triple-A East. The start of the season was pushed back to May.

Aside from winning on 2021 Opening Day, the Mets got off to a slow start, ending the month of May with an 8–16 record. The struggles continued in the month of June, where they endured a 15-game losing streak from June 6 to June 24. The 2021 regular season will be followed by the Triple-A Final Stretch, a 10-game tournament among all 30 Triple-A clubs, wherein the team with the best winning percentage over that stretch will receive a prize from Major League Baseball.

On August 29, 2021, the Syracuse Mets tied with the Rochester Red Wings to finish a game for the first time in franchise history. With the game tied at 3 in the bottom of the 7th inning, a 40-minute rain delay was in place before the game was called due to the rain. The game was ruled as a tie because the two teams would not play each other again that season.

In 2022, the Triple-A East became known as the International League, the name historically used by the regional circuit prior to the 2021 reorganization.